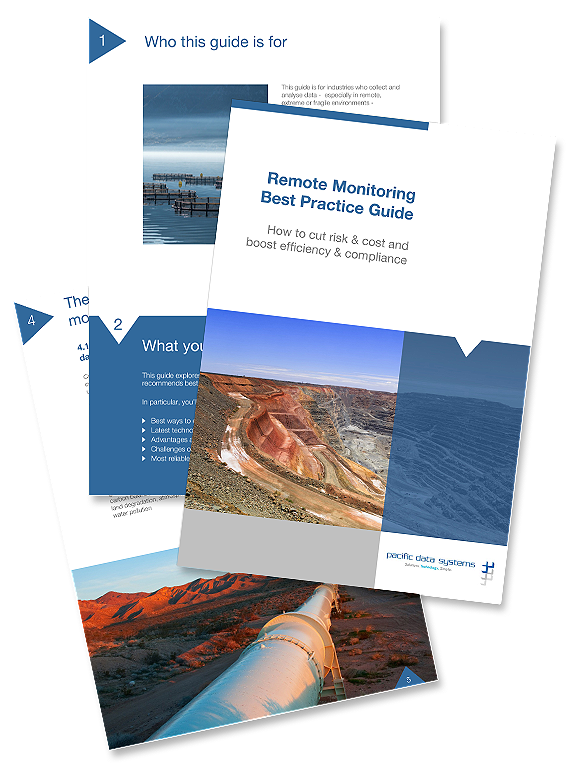 The following Case Study is by Pacific Data Systems, a leader in remote monitoring solutions based in Brisbane, Australia. Download the full Case Study here.

ConsultCorp* is a global group which provides practical solutions for companies involved in mining, infrastructure, energy, urban growth and natural resources. In this case, its client was a major mining company.

The mine’s location was the first challenge, being situated in inaccessible, mountainous terrain which was out of 3G and 4G network coverage and right next door to sensitive environmental areas.

As part of its environmental governance commitment, the company needed to remotely monitor groundwater levels at seven sites around the mine, monitoring continuously but collecting data once per week.

To meet this requirement, ConsultCorp sent two of its people to site each week. This was costly for its client and risky for ConsultCorp’s people, especially in extreme weather which was known to include snow.

As the senior hydrogeologist, John Carson said, ‘We looked at a few options at the time, but none fitted our needs. Radio transmission meant setting up and maintaining a string of stations over kilometers of rough terrain, which was out of the question cost-wise, and the other satellite-based systems used outdated technology that needed a lot of tinkering to make work.’

Elegant, smart and fast to install

Carson decided to call Thermofisher Scientific, a leading provider of specialist equipment, who recommended Pacific Data Systems, who had been developing remote monitoring solutions for three decades. At the time, PDS was developing satellite-based system called SatVue which was based on advanced technology and was an off-the-shelf ‘plug & play’ device. SatVue is a compact, rugged system that uses ORBCOMM’s technology and the IsatData Pro satellite network to transmit data. The SatVue system is self-sustaining with a built-in solar panel. The satellite terminal is IP67 certified and designed to withstand harsh environments, extreme temperatures and high humidity. As designed, the installed equipment and corresponding services require minimal onsite maintenance and support.

As Carson says, ‘SatVue looked like exactly what we needed – elegant, smart, fast to install, up and transmitting in seconds and cost-effective to run. More than that we could be involved in its final design, which was very valuable ’ ConsultCorp worked with PDS’s R&D team in the final stages of development, and ended up choosing the SatVue bore model for its mining client.

Carson’s role has since changed and it was another Senior Hydro-geologist, Justin Laird, who oversaw the implementation of the new SatVue system across the client’s seven sites.

Laird said that, although it needed a little fine-tuning beforehand to convert pressure readings to water levels, the actual SatVue installation was very fast: ‘It took only about five minutes, most of which was the physical installation. The SatVue device took seconds to work: we just hit the power button’.

Looking back, Laird is quick to point out the impact of an automated remote monitoring solutions for his mining client. For him, it wasn’t just a matter of money, but one of safety too.

‘We used to send two of our guys out every week and they’d take a whole day to get around all seven sites. Now it’s costing us less than $30 a month for satellite. Including the initial capex, that’s a saving of over 80%, and our guys aren’t being put at risk anymore, too.’

‘SatVue does what it says’

Laird expects that site visits won’t be a thing of the past entirely, but will be reduced by 99%. He expects that ConsultCorp will probably visit the sites every two years to replace the batteries, but feels it’s a small price to pay, in comparison to the expense and risk of the previous routine.