On December 21, 2015, ORBCOMM launched the second satellite installment of our next generation OG2 constellation. Eyes from all over the world witnessed the historic SpaceX Falcon 9 rocket launch (and subsequent landing), and the successful placement of 11 additional OG2 satellites into orbit. There might have been a little anxiety in the air, but everything ended up going off without a hitch, and we’re happy to report that all satellites have checked in, are healthy and are currently undergoing extensive in-orbit verification to ensure a superior level of service for our M2M and AIS customers.

ORBCOMM launched six of the industry’s most powerful AIS satellites in 2014, significantly improving our ability to provide global AIS data—the volume of AIS receptions increased, while latency and satellite/vessel revisit times decreased. The powerful nature of these communication-grade satellites allows for near real-time decoding and extraction of signals, even in the harshest environments.

With the launch of 11 more powerful AIS-enabled satellites, ORBCOMM now operates the largest space-based AIS network, with 18 total AIS-enabled satellites. Combined with our existing network of 16 ground earth stations around the world, average AIS data latency as short as one minute can be achieved, which enables near real-time monitoring of vessels and increased analytics capabilities. The high number of satellite passes (up to 135) and coverage overhead up to 90% of the time, translates into data refresh rates measured in minutes. 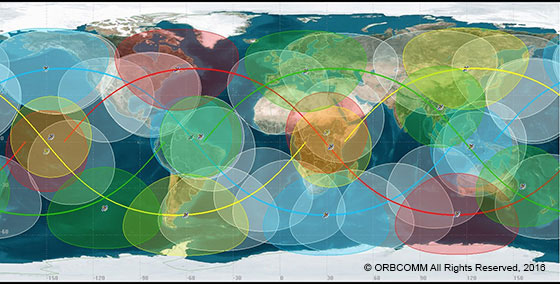 To learn more, visit our website or come see George Best, Director of AIS Sales, EMEA and APAC, discuss ORBCOMM’s new AIS constellation and capabilities at Maritime Reconnaissance and Surveillance Technology 2016 in Rome, Italy from February 15-16. Going to be there? We’d love to meet with you! Schedule a meeting with us.