Look Ma, No Hands! The Future of Self-Drive Trucking 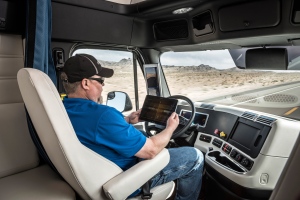 The driver can hand over full control of the self-driving truck when traffic and other conditions allow it. (Daimler Trucks/ CBC)

Freightliner (owned by Daimler) just announced that it has received approval to allow its self-driving tractor-trailer to self-drive on public highways in Nevada. This is not the same as a driverless truck—drivers are still required to be ready to take over in times of traffic, when they need to overtake, or on non-highway roads. However, this represents a pretty significant step forward in achieving that milestone.

Freightliner is not the only company looking into self-driving vehicles. It’s well known that Google is trying to develop their own completely autonomous self-driving car, and the car industry is trying to counter that threat with their own plans. Volvo has been pursuing this for a different reason for some time now as part of their project to achieve ‘zero fatalities’.

But what will this mean for the trucking industry? For a driverless truck, this could mean longer hours on the road (24 hours/day), ‘perfect’ driving/fuel efficiency and reduced labor costs.

This is a very long-term goal, and one that won’t become reality for quite a while. As an initial step, the trucks might become driverless between cities, requiring drivers only to hop in to make the initial pickup/final delivery. In this case, monitoring driver behavior is still important on either side of delivery, but in order to maximize the benefits of such a system, the two key features the end fleet management solution will require are gaining a tighter control of the scheduling logistics (zero truck down time), and monitoring truck health for maintenance purposes (no subjective driver feedback).

The payback of reducing driver overhead is clearly there, so we can expect this system to someday become a reality. When do you think this will happen and what does it mean for the future of fleet management? Share your thoughts below…

2 comments on “Look Ma, No Hands! The Future of Self-Drive Trucking”